Why do I watch these movies? Oh that’s right, I love over-the-top gratuitous violence in movies. There was so much neck-breaking in Olympus has Fallen that I might have pulled a muscle!

The plot is typical and predictable (there should be a portmanteau for that – predictypical? Typictable? I’ll work on it) and that’s what makes it any good. Sometimes, I just want to see someone kicking ass and saving the day, no matter how many cheesy lines come with that. I especially liked Gerard Butler talking to the head of the terrorist group:

“Let’s play a game of ‘fuck off.’ You go first.” OH-HOH! He’s gonna need to get himself to the nearest burn unit – luckily the whole White House is on fire so it’s extremely accessible. Get that man some neosporin, some gauze, and an ibuprofen or it’s gonna get infeeeected!

(That’s how these jokes go, right? I’m doing it right?)

Well, this movie certainly doesn’t need an essay worth of a review. If you’re into that patriotic stuff, you might (legitimately) enjoy it. If you want to see gun-violence, some stabbing, some neck-breaking, and explosions, you might enjoy it. If you’re trying to see the next Oscar winner…well, I don’t know what to tell you.

** stars (that might be one too many but hey, I watched intensely for two hours. And I always believe Gerard Butler as a man who kills lots of people. Also, Morgan Freeman got to play President.)

By now, if you know me or if you’ve read a handful of reviews I’ve written, you’ve probably realized that I:

A. Love heist movies
B. Can’t say no to Jason Statham

So yeah, I’m spending the morning watching a movie that incorporates the two. A little movie called Parker, which also stars…J.Lo. I’m writing this bit before watching the movie. I am anticipating: sexy times between J and J, a lot of gunfire, at least one explosion, and a tired plot.

But I don’t care. BECAUSE I AIN’T TRYNA THINK. Now. I’m going to grab some Oreos, a huge glass of milk, and indulge in awful.

Apparently the opening of this movie, which takes place at the Ohio State Fair, was ACTUALLY SHOT in Ohio. And I wasn’t there. I wasn’t there to get arrested after my attempt to rub Jason Statham’s bald head and rippling abs. I could cry, you guys.

As predicted, this movie was boooooring. Jason Statham getting revenge on people and being a badass doing it. But all the same, nothing about the movie was interesting. It was predictable. Just to spoil it – he gets revenge. On everyone. There is never a question as to whether or not he will. He will. And he does.

For a bit of the movie, he’s pretending to be from Texas. Now, I’ve never been to Texas but I know that whatever was coming out of his mouth was not even close to what people from Texas sound like. The most Texas thing about him was his big ol’ cowboy hat. He wasn’t even wearing spurs! And everyone knows that if you’re from Texas, you have to wear spurs at all times.

Can someone please tell me what’s been going on with Nick Nolte for his whole life? When he first came on screen, I thought he was wearing a fucked up prosthetic face. Look at this:

Parker was a most unfortunate movie. Typically, I can enjoy a Jason Statham movie because you can always count on it to be absurd and over-the-top and so beyond the realm of possible that you just buy into it. This movie was just…blah. It was like going to Chipotle and getting a tortilla filled with just brown rice when I wanted a whole fucking burrito! With steak and guac and two kinds of salsa and sour cream and a mountain of cheese.

James McAvoy wielding guns and yelling? Yes, please. Sign me up. I’ll have what she’s having. Is anyone else feeling faint?

This is all incredibly biased because James is in my Top 10 of nearly anything ever. He’s one of my dream men. I could watch him doing anything. Accidentally sending letters with vulgar language, as a half-goat man, in a wheelchair, anything. Absolutely anything. Already I want to give this movie 5 stars solely for starring him.

But, y’know, realistically it wasn’t the worst and it wasn’t the best. It had some fun gun fights (though some of these gun-wielding men had some questionable aim), no obligatory “sex-scene-in-an-action-movie-to-make-the-main-character-deeper”, and a couple of twists that were actually a little twisty. Nice.

My biggest complaint is the opening scene. James is on the hunt for Mark Strong, notorious baddie in almost everything, and his motley crue of motorcycle-riding thieves. So, they’re driving around what I guess is maybe somewhere in London? Either way, it’s a metropolitan area. And there are zero cars. None. Not one parked on the street, not one driving around. Sure, it’s the middle of the night, but cities don’t shut down because it’s 2 AM. People are out committing dirty deeds and out for late night ice cream treats. 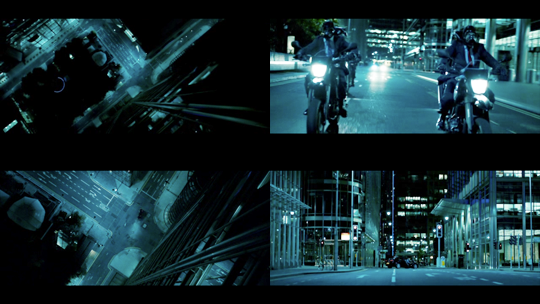 You want me to believe that these streets are DESOLATE right now? Please, what do you take me for? A total sucker?

Stylistically, it was pretty fucking cool. Clothes were awesome (sorry, I’ll never say no to James in tight jeans and a nice leather jacket), it all had a very blue tone (which kind of worked for it), and it was sleek.

The movie was all right. It was a cat-and-mouse almost-caper where you weren’t quite sure whether you were supposed to be rooting for the protagonist or antagonist (really, you’re supposed to like both I think, but you know what I mean). For the most part, it is predictable. It’s obvious who most of the traitors are – and you know from the first few minutes that there will be traitors – but a few might catch you by surprise.

Honestly, I just wanted to see this movie so that I could witness James wielding guns. 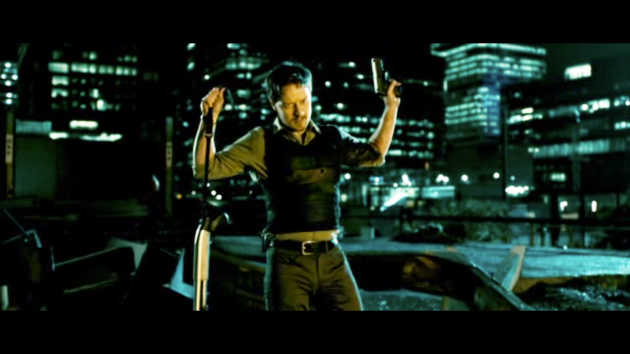 Oy, mate. Look how fit you are! 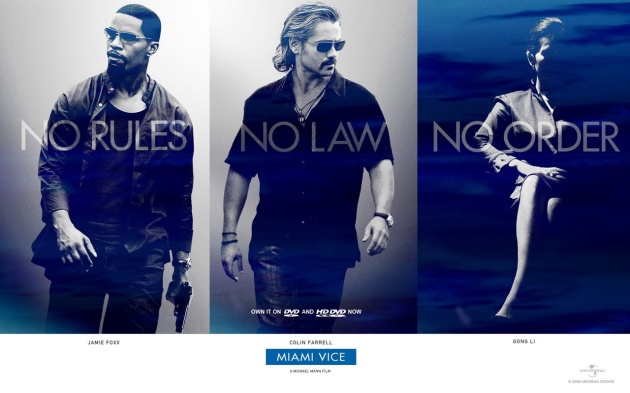 Started my morning off the right way – watching Michael Mann’s Miami Vice starring Colin Farrell and Jamie Foxx. Sidenote: Why are there two x’s in Jamie’s last name? That can’t be real.*

I enjoy Mann’s Heat (which for some reason, I never wrote about) but was skeptical about a movie version of Miami Vice but as it happens, it’s pretty good. It’s got some bitchin’ visuals, some cool but normal explosions, and plenty of guns. I’ve grown accustom to watching action movies with some sort of twist or super complex plot that leads to a lot of backstabbing and double agents and shit like that.

Not Miami Vice. Nice and straightforward. Just a couple-a guys trying to catch some bad guys by going undercover all while makin’ sweet love to their ladies. And you know what? The mission is accomplished.

As always, I have to talk about the soundtrack. It was…well, there’s quite a variety. We’ve got Moby (naturally. It’s a Michael Mann movie), John Murphy, Nina Simon, Jay-z & Linkin Park, and a weird cover of “In the Air Tonight”. In other words, I feel mixed about this soundtrack. Mostly that Phil Collins cover. That shit is whack.

Not that I know the first thing about special ops or agents or stuff like that, but the movie seemed extremely realistic. Which, in a way, made it just a little bit boring. It was also two hours long. That makes me mad, though, because Hollywood has apparently conditioned me to expect over-the-top explosions, mass carnage, and insane weaponry in every action movie. Damn you!