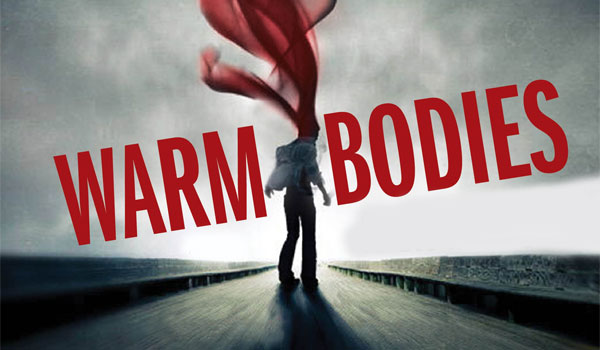 Ah! A fresh take on zombies. Warm Bodies was either going to be awesome or awful. Okay, maybe it was going to be – as I like to say – awfsome. I hope you’re ready for spoilers because they’re gonna be coming at you left and right in 3…2…1!

Zombies exist. And our protagonist is some zombie teenager or early 20-something (we never really find out). He’s dead but he has complete and hyper-aware thoughts. His narration could pass for something one of those little shits in The Perks of Being a Wallflower would say. So I have to wonder, if he has all kinds of mental capacity to make witty jokes in his mind and take note of everything going on around him…why again is he a zombie and not just a guy who craves human flesh?

Moving on. He’s getting ready to chow down on some people and he comes upon a group of fresh-faced youths. Then he gets a peek at Julie Blonde Kristen Stewart and she’s so pretty he doesn’t even want to eat her.

But he will eat her boyfriend, Dave Franco. And he does. With like, no remorse. In this zombie world, when a zombie eats the brains of a person, he experiences all of the victim’s memories. Meh, not too shabby of an idea. Interesting, definitely.

So he eats Blonde KStew’s boyfriend and just as all of his zombie pals are about to descend upon her with their diseased mouths, he saves her by rubbing some of his weird, brown zombie blood all over her face and says “S-s-s-saaaaaaaaafe” and take her as his captive.

This zombie kid is in love with KStew 2.0. Is it just because she’s so super pretty or is it because he took on some of Dave Franco’s memories so he has this sense of history with her? I have no fucking clue. But he takes her and he keeps her captive. She really is not willing. She tells him to stay away from her and tries to run away. Twice.

And both times he saves her and brings her right back to his “home”, an abandoned airplane with all kinds of hip shit in it – mainly VINYL GODDAMN RECORDS. Yeah. They lay around listening to Bob Dylan and Bon Iver records. I’m so fucking sure. I’m so fucking sure a zombie can work a record player and appreciate how “deep” and “alive” vinyl is.

So what happens? These two craaaazy kids start a zombie/human revolution. They hold hands once and suddenly all of the zombies are like “Now that I’m seeing this…you know I’ve just really lost my taste for brains. I think I’ll just turn myself human!” and they kill the real enemy, the Bonies (skeletons that run in a very unnatural way and eat ANYTHING with a heartbeat), with zero remorse which is really kind of shitty. I mean, the whole time the zombies were like “Have mercy! We’re becoming normal!” but God forbid they give the Bonies a fighting chance to get their shit together.

The humans and zombies band together and an extremely anti-climactic climax occurs. The zombies become humans again. The world shall be restored or as people so cleverly kept saying, “exhumed.” Oh, ha ha, yeah we get your clever joke.

Ultimately, some dude with the urge to eat people kills a nice young man and eats his brain. He then takes said young man’s girlfriend captive, all the while masquerading as her savior. The girl gets Stockholm Syndrome and falls in love with her captor. They turn all the zombies back into humans by using feelings and it takes little to no effort.

* star (I kind of liked some of the soundtrack for my own ears. And Rob Corddry had like two good lines.