The plot: “In a cyberpunk vision of the future, man has developed the technology to create replicants, human clones used to serve in the colonies outside Earth but with fixed lifespans. In Los Angeles, 2019, Deckard is a Blade Runner, a cop who specialises in terminating replicants. Originally in retirement, he is forced to re-enter the force when six replicants escape from an offworld colony to Earth.” – IMDB

My thoughts: I’m a little ashamed to admit that last night was my first time viewing Blade Runner. It’s a sci-fi classic and as a self-proclaimed geek/nerd, it’s something I probably should have seen ages ago. I guess that sentiment is applicable to a lot of films. Plus, I’m old enough now to fully appreciate a film like Blade Runner! Anyway, it’s been on my list for years, but a few months ago I was at a restaurant where I’m pretty sure Blade Runner should not have been playing and I saw this shot:

At that moment, I thought to myself, “If I don’t see Blade Runner, I’m just going to hate myself forever.” So last night, I finally did.

Honestly, I think the most stand-out thing for me was not the plot or the acting, but the art direction and shots in this film. It was beyond gorgeous (particularly the scene shown above in GIF form.) The costumes, the cityscapes…it all felt wonderfully futuristic and complete. I think that a lot of “in the future” movies work hard to make cute winks and clever jabs at technology’s current state, but in Blade Runner, it was an entirely new world. It looked like crazy people had moved to a new, inhabitable planet and made an almost Earth but not really and then let it slowly fall apart.

Harrison Ford and Sean Young were good in it, but I was more impressed by Rutger Hauer’s performance as I think is 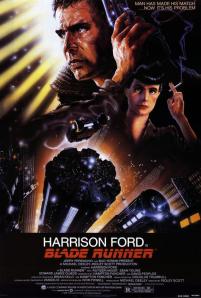 common after watching Blade Runner. He’s obviously psychotic and yet I fully sympathized with him. All he wanted was to live and love and in the end, he was just a desperate guy with no one there for him. Come on, that’s pretty sad.

I did a bit of reading up on the movie and in ’82, I guess it wasn’t especially popular. People wanted Star Wars and what they got was a film set heavily in developing characters in the future with little action and little galactic combat. A lot of critics thought that the plot was lost to special effects and that it was slow moving. True, maybe. But rather than saying “Here are the good guys, here are the good guys, let there be war,” the film really lets us get to know characters and I don’t know, probably wants us to question what it is to be human and blah blah blah.

The point is, it became a cult hit and Blade Runner stands the test of time even 30 years later. I really enjoyed it and can understand why it’s a sci-fi staple and see what influence it’s had over the futuristic/sci-fi genre. The acting was great, the design and art were impeccable, and even Vangelis’s soundtrack was wonderful.

Error: Twitter did not respond. Please wait a few minutes and refresh this page.